FREE MiND does not obey – K.

“When it snows, people know nothing.”

New revolutionary super intelligent electrical currents engulf our planet / solar system and existence now. Spectacular mental ignitions, happening, all the time now. Jupiter – Uranus – People who observe events world-wide might feel like by now they lost their compass. We told you in these pages two years ago that this will happen.

The world will slowly adapt to new energies we move through / that are coming in to change our wiring. New higher frequencies untested, and inspiring… have encompassed this mankind’s collective mind scape; we are along for the ride – knowing it – or not. But not necessarily “all in it together” = as in understanding where this leads. Very few know where we go…

FlashBack
One Hundred Years to day:

Be aware now: The Many Events & time lines we witness in 2017 – 2020 [ all the OUTER collective stuff & inner personal individual drama/s ] – are neither sociological, let alone political, nor economical only, rather, we know now that they ALL are ELECTRiCAL in nature — Astro=Logical anyway. This is the next step UP from Sociological. Which was next step UP from Political.

ASTRO=Logical knowing which I know beyond HiSTORY, is equal =
comes around = goes around. Except it goes + ” Spiral–istic ” !! 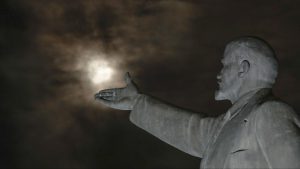 Eclipsed Sun in Pisces — guided along by Vladimir Lenin:
“Trust is good, control is better.”

This Cosmic 2017 energy phenomenon in Rooster Year — (asteroids in the “Gate of God”, Sagittarius / plus Centaurs in the sign of Pisces) has peculiar effects — spanning full spectrum into 2019 whenJupiter is in Sagittarius, sign it rules — teaching Truth Philosophy & Far Sight . . This means a new social science will come about. A new Tech Future society able to manage itself – after 2020 – We will learn to navigate anew – with Druidic help, if need be.

\
February Revolution in Russia – and we are at a similar point again now. But with 21st Century Aquarian Age circuitry. Completely untested group effort, and new with tech savvy societies.

In more detail we explained all this in our documentaries. New medicine, new energy, new tech, physics, 11 based math, sciences, new society. This is in the making, in the WORKS into 2045… will take a while, will be getting there, no problem.

Meanwhile HUMAN society is threatened by NON HUMAN alien intervention in a guise of a “belief system” alien and non human. People of the books? What books?” – “Rune systems Nordic.” Islam is no human when you think of it, as it is not from here and anti women. It is here to distract folks and divide them. Go back to what the SUFiS taught YOU!

You need understand (Commander Spicer not-with-standing) that we know things: The mainstream (and fake alt) media both in EuroLand and in America is “the red-light district of discourse” in a human intelligent society – – [term by Dr. G. Heath King] – and no one would venture in there, unless very bored.

“If the observer is different from the thing observed,
then there is a contradiction
— that very contradiction is the cause of confusion.” –


Alex Jones tunes in to Reality!

Planet EARTH (Shikasta) has entered the new Tech Aquarius “Age” Cycle change / upgrade around November 2016 – February 2017… and so what does all that mean?

Understand hidden history — The biological structure of humans is a hybrid suitable for living in hybrid environments. When humanoids were needed on Earth to create functioning work societies this off Earth hybrid was adapted to live and function on the surface of the Planet “ADAPTA” in Sumerian.

Even the adapted hybrid form is not suitable to live on the Earth’s surface as do animals and birds. My cats are ok in the wild, for days if need be, albeit prefer it around my infra red heaters. Humans need shelters .. heat .. clothing .. tools [knives] and cannot survive naturally on Earth’s surface.

Human beings are not the dominant species on Earth, they are a DEPENDENT species.

As Jiddu Krishnamurti pointed out: Consciousness is a functioning grid existing outside the brain. The human mind connects to / tunes into and makes use of an intelligent Earth Internet Grid around the Planet

Many cultures knew this and made use of this before and through the times of Atlantis and after its fall this knowledge of the Earth’s operating system continued as meditation and other inner mind practices. But the most revealing times in this respect are the end of an era and the beginning of an era.

As a NORDiC ASSET – I explained to you how this “shikasta fiction” is NOT fake news.

Each species on the Planet have their own unique functional intelligent navigation systems built-in. This includes survival skills and interactive social skills and levels of species interactions. The genetic electrical current in Alpha male wolves have capacities others do not have. What switches that on or off is the development and abilities of the incarnate spirits.

Human civilizations are currently facing the end of the old era and are entering an upgrade: A New Era Unknown.

The electrical signatures of consciousness have to be able to interact with / understand and read the new frequencies. All communications are simply electrical current [energy] frequencies … and that is what is about to dramatically change.

Planet is definitely getting a frequency upgrade perhaps never seen before on this Earth, since Atlantis anyway. At the beginning of each new cycle (26,000 years) or era there are levels of social chaos as the Operating System shifts. This current shift is also bringing in a new Aquarius Technology [high technology society] awareness.

Those whose inner operating system cannot adapt to this change in electrical current are going to have severe difficulties dealing with a BIG UNKNOWN:

As to Trump / Bannon‘s “movement” = give it 16 years, and see by then how it looks! It is well thought through. Trump studied famous “Power of Positive Thinking” Pastor Norman Vincent Peale, personally – by seeing him on Sundays. Bannon studied Lenin, not personally.

I studied it all. I also studied N. Machiavelli.
This age will have to overcome extreme depravity.
We will succeed. 2020 CAP. Saturn Pluto etc.. 500 years cycles.

See. . we were guides to share with you a while back AL-READY
that we will move BEYOND “personalities” — into people/s UNKNOWN.
a tech savvy society does not depend on “famous names” any longer.

Thats the NEXT STEP few of us like to take.

— WORD of this SUNDAY:
“A FREE MiND DOES NOT OBEY!”
– from Jiddu Krishnamurti ‘s famous quotes

“When it snows, people know nothing.”

— “The urge toward mysticism – the urge to experience a dimension beyond the material world, to know and return to a spiritual Essence or Truth – is inherent within every person, irrespective of his or her religion. Individuals are imbued with this tendency to differing degrees. Some are endowed with it in quantity; others, only in a small amount. Some people have a chance to develop and translate it into their daily lives, while others do not. Nonetheless, this tendency is present in every human being. Sufism (or tasawwuf) is but a natural response to this very ancient human urge.” —