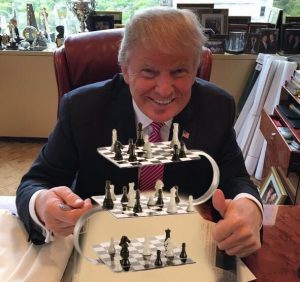 Donald J. Trump has high potential to FREE people from themselves, if they WAKE up soon. He mirrors mindful archetypes in human History – all pointing to a future of self determination. Aware students of Shikasta 1979 by Doris Lessing understand that 2016 / 2020 is in real time and in astrology the moment, and represents the transition when many vectors of destiny are set in motion. Now!

There is a dark force ( – alien to this world – ) at work on this planet trying to take over all resources and humans. This has been going on a long while.. Think “Blade Runner” — Nowadays we know all this as “Black Budget” / WingMakers, etc. See CAF Solari Report by Catherine Austin-Fitts.

There are few individuals and connected types guided by higher forces who work towards a unification of humans, all of mankind, by showing them what they have in common – commerce, resources, time, trade, education, health, peace, prosperity, space age tech, imagination… etc.

Watch this 1 hour if inclined.

In history or antiquity, after Atlantis, few have had a good effect on things. There are archetypes like the enlightened King Cyrus and his efforts for peace and prosperity, or the unifier archetype Genghis Khan and his vision to bring together the warring Nomadic tribes and secure the lands. Each his style and merit. 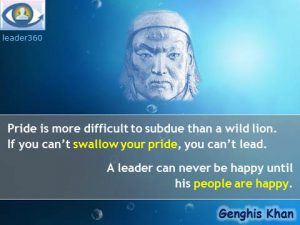 Trump is in the league of say General Patton (pointed out to me by political consultant Henry Canciglia who served President Ronald Reagan as personal Army aide) – and Trump is in the league of Genghis Khan (pointed out astutely by Dr. Heath King) and he had as his mentor, as pointed out also by Dr. G. Heath King, the famous Norman Vincent Peale – The Power of Positive Thinking. (Here free PoPT NVP condensed PDF version)

Donald J. Trump is a rude awakener speaking Truth to Power. Uranus Sun in Gemini. Unfiltered mind scape – balanced visionary. Jupiter Neptune in Libra, and his eclipsed Sagittarius moon of birth puts him in touch with the psyche and future of mankind. He is a teacher, a seer with an eye for how it will look…

His fearless style is to promote a world based on human meritocracy, where we succeed at what we do and earn our stripes and rewards, as opposed to a society controlled by an Alien Oligarchy with no way out on a prison planet. He is “different” in that he is not brainwashed. Maybe people can learn by observing how he will do it.

He doesn’t tell people, he shows them how to win.

Dr G Heath King wrote: “I, like Trump, insist on giving credit only where credit is due. Only then can our budding republic, like that proposed by Plato, be a meritocracy. Not an insipid swarm of leeches, as the nation is at this time.”

See Dr King: Trump & The Dawn of A New Era

The birth meridians and astrology of Trump connected to 2016/2020 (any astro professional worth his her craft sees this instantly) in real time astrology shows a massive POTENTiAL of him returning to power, Jupiter return, and a lot of responsibility will be placed on him during the years ahead.

Trump astro is about Self-Determination / Creative Originality. True Leadership! The Art of The Deal, his Patton style like approach to how he wins, it is pure Westernized Zen. Trump might just as well have been Patton or Genghis re-incarnated, which is technically possible. (for those who believe in this stuff.)

As to the intrepid Julian Assange – ever reclusive super genius (Cancer Sun / Scorpio moon native) – he is sent in to level the playing field in Jupiter Mercury LIBRA now, and it remains to be seen how effective this will be, but it will have ONGOiNG impact beyond 2017; and as the Mars Pluto conjunction separates in Capricorn, opposite fixed star SiRiUS, a new cycle in world affairs starts.

The world situation asks for / demands / will install a total liberation from globalism. Almost at any cost. Think BATMAN truth tribunals… special prosecutors and all. A peaceful settlement.

What is Trump by choice?

A BUiLDER. Maybe ET Shikasta in nature Sirian.. perhaps guided by Nordics, you never know… In the future, should he become US President, his astrology shows a unifying and balancing force at work for world commerce, fair trade, balanced economy and a return to general sanity and mutual prosperity – shared prosperity. With an opening towards universality. He does know about the Black Budget. The black hole of mankind.

I see a greater future ahead for Trump, for USA and for the world. Uranus in Aries wants people power now and SELF DETERMiNATiON while PLUTO in Capricorn clings on to secret power and total control. It is a matter now of how many of the people are understanding how the world really works. ALL the peoples, not only America.

President Putin is expecting to work together with President Trump, to open up to reality, and to create prosperity for all, and to move the world into a better, peaceful place. The astrology is not at fault when destinies are missed. The astrology helps to meet destiny.

What will Trump’s challenge be?
Black Budget Space based economy / secret society stuff.
What could his answer be? Integrate it into humanity now.
Move mankind a notch further towards its cosmic destiny…

Bull'sEye. Free Your Mind! Trump has won for you people already! https://t.co/kkYIskwwnO