Complex psycho drama – millennia of willing spirits of trauma; plus deep-state conspiracy – international anarchy networks – attempting to take down rule of law in Europe. Uranus challenges every planet by 2018, chaos engineered as of 2011 Fukushima: I suggest by 2020 a European Federation of sovereign regions, Nordic style. – St.Clair 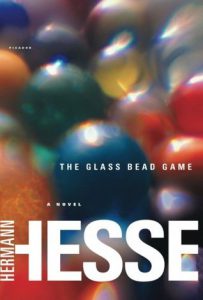 Putin on Catalonia et al..
“EU triggered rise of separatism by supporting Kosovo independence”
(- a Karmic and justified comment – by one who knows things he cannot say.)

Catalonia 2017 is a re-run of Napoleon’s 18 Brumaire — historic most brazen coup d’etat — show in town.

18 Brumarie = 9 November 11/9 / 2014, when Mas did the “CatLand Plebiscite”
It is more esoteric and trauma related than actually relevant sociologically.

When the police boss (and half his corps) is accused of sedition, and of shady praetorian guard tactics to secure a rogue government from judicial inquests, then something does not sit well. When a judge has to ask a police boss what he did to prevent street chaos.. and why he did not obey orders? Then you know someone is not doing their job on purpose.

Rumor has it.. This is the 1 man no law is said to be able to touch: MasterMind – Oriol Soler ? He is said to pilot the “process” within a central group of the directorate, the hard core of about 7 people, known as the “Sanedrin”.

Definition of Sanhedrin : “the supreme council and tribunal of the Jews during postexilic times headed by a High Priest and having religious, civil, and criminal jurisdiction” (Dictionaries)

Investigators of Guardia Civil intelligence have proven to Spanish judges in courts that a group of about 400 political operators / influence peddlers — a higher shady cabal of international / anarchic tendency people, a junta — with the usual secret society affiliations & rituals — have taken things into their hands since 2014. We now need to roll this BACK.

These int’l global Soros type folks = ‘Masonically etc.’ (ritual sacrifice clubs) = connected to ‘professionals’ of all kinds [Venezuela ideology group mind, Estonia digital tech, Ukraine PR communications, Israeli security & intel etc. and more] — and who helped a Napoleonic style “Directorate” in Catalonia for years (decades in silence) in how to create separate, alternate / parallel realities of a state structure, with the data of all citizens in block chain online secured, but open to hackers, so as to hijack an ongoing administration both in cyber space and in the street.

This is NOT a fake clip. It shows a fallen (by accident) ballot box in a black bag \ stuffed with ballots – BEFORE the vote started.
– Source: El Manifesto

This drama was 500 years in the making.. the outcome uncertain.
In Montjuic in BCN, the Junta Directoraten opened the deep graves of sorrows again

Putin once again, at Valdai Club, states truthfully that the EU triggered the whole thing and he shows the historical context, the double standards, the lies,and the flat out ineptitude, and the Karma it triggers:

““As for the situation with Catalonia, we have seen a unanimous condemnation of the independence supporters by the EU and a number of other states,” Putin said. “Regarding that, I have to say – you should have thought about it earlier.”

“Did they not know about centuries-old contradictions of this nature in Europe? They knew, didn’t they? But at the time they de facto welcomed the disintegration of a number of states in Europe, with undisguised relish”

Once again, you need a Russian to teach you your stupid histories.

Madrid (which once conquered the West of the world) faces down an elaborate global super professional / digital coup d’Etat which took place ages ago in 2014 already. This phase now is just the “out in the open” albeit failing end game… The EU watches on – as usual totally clueless . . . This is highly “advanced” and new in a rule of law situation, and designed to cause total chaos in Europe. The Napoleonic “directorate” around Puigdemont was in effect under Mas, and also under Pujol Godfather who parked half a billion in kick backs in Andorra.. Only now the masks fell because too many anarchists joined their ranks.

The aim is to take down Spain – one of the most civilized rule of law places now – and then Europe with it – by taking control of Catalonia’s wealth / industry people machine – and to teach other regions among the 98 in Europe how to do the same and split from their nations. At that rate we then can have a federation of 98 chaotic regions and Putin / China / india will choose which they can do business with. Anarchists? An-Archontes?

Meanwhile… since the 1st October 2017 “rigged referendum” we witnessed four (4) billion Euros withdrawn in ONE DAY from Catalan bank accounts, by private people. [By 20th Oct 2017 the count is 12 EuroBillion and 800 corporations gone.]

We then saw ALL Catalan banks change their registered addresses into Spain, and 48 hours their funds left also to be in EURO hands safely . . . and we experience now EiGHT hundred (800 now + counting) companies — large medium and small — all exiting Catalonia — in under two weeks — mass exodus of talent, asses & assets, and all of it. It is a business minded referendum on your economic feet, but the KoolAid anarchists / directorates deny this stark reality.

This is an astrological disaster I told my friends about. No one listened!!

I warned them about it, they laughed at me. Fine. If that was the plan, I don’ know who is in charge of it, nor what is next? My guess is they sink themselves into oblivion. Once again a fact: 65% of Catalan inhabitants are against this project. Only 35% are hijacked to mobilize, mislead by a few anti-social anarchists.

If a group in say Texas or California tried this number (with state senate minority) someplace in USA, or in Germany, or France, they would call them “domestic terrorists” and send down the SWAT teams – here we argue in civilized terms about if they just ran a sociological red light district – or if perhaps they attempted / committed sedition? Time ran out for esoteric considerations.

Jupiter in Scorpio will unveil a lot of hidden hand strategies in the year to come. 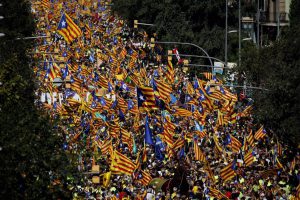 This is the kind of stuff I was taught as a teenager in Swiss Lands. If you see such scenes, you know that general “CIVICs” are taken hostage by dark powers, and generally in a European advanced culture we should no longer see this insanity. However, I am taught that this is INBRED and normal. Nordics say we got work to do.

Media wars, Slovenia is often invoked, and it says this:

Slovenia calls for respect for the Constitution to resolve the crisis in Catalonia. Slovenian Prime Minister Miro Cerar said Thursday that the independence of his country from Yugoslavia 26 years ago is not comparable to the situation in Catalonia, a crisis for which he called for a peaceful solution within the Spanish constitutional order, reports Efe.

“Spain, including Catalonia, is a democratic state, and when there is a question about self-determination must be resolved in line with the constitutional order of Spain and, most importantly, it must be done peacefully, without violence, democratically and with dialogue,” said the head of the Slovenian Government.

No citizen / inhabitant from another democratic country in Europe has ever been forced to clarify that they live in a democracy. Yet, this happened to me now many times.

* Do study in Spanish the complex Estonian game plan for Catalonia

How Catalonia’s secret societies use Napoleon’s Masonic code of legalistic revolution is a subject of deep research. Only KUBRiCK understood the M.O. of the deal, and I have been studying it for 40 years, and I will have the last word on that subject… Lator, much lator. 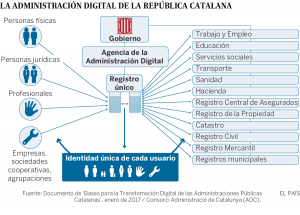 * How they pulled off the 18th Brumaire in Barcelona on 6th September 2017?
Read Catalan Complexity – by St.Clair

* Don’t be asleep at the wheel... investigate in SCO Jupiter!! —
Stay tuned Michael St.Clair’s noetic film clipson Jupiter Scorpio – will explore the hidden hand/s — and publish the secret knowings / findings during the coming 12 months into end of 2018. Snowden was NOTHING YET, now comes the BIG download in 2018…

When 13 Big Bears & 1 Fat Pig are needed
to guard your secret green plantations..

She has psychic imagination & it is fun to follow her mind . .

This is like Chinese Astro, Pig generous dude.
You are better off with 3 smart wild bad cats.

My cat's (Elven) wisdom: "Be nice, polite & professional, and have a plan how to kill anyone you meet." (james Mattis) pic.twitter.com/fR19gPPK2w

In astrologically intelligent terms, weather events plus more..
the whole WORLD goes through the ‘eye of the needle‘ by 2020-2025.
Two phases, PLUTO / SATURN & NEPTUNE / SATURN. Then off to the races.