27 Oct 2017, Catalonia’s ‘Republic’ lasted 5 hours – or 3 moon degrees in Aquarius. April 2016, Madrid’s Moncloa, during their only formal meeting, Spain’s (Galicia’s) Mariano Rajoy gracefully gifted KRLS Puigdemont of Catalonia with a rare edition of Cervantes’ Quixcote. The joke was not lost, yet went down real bad in Catalonia. You just cannot underestimate the guys who took down half of the world westwards.. 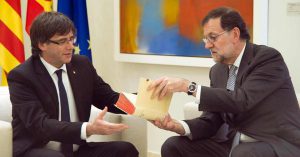 Franz Kafka’s Der Prozess [‘The Trial’] in mind, “Someone must’ve slandered JK., for one morning, without having done anything truly wrong, he was arrested.”
“From a certain point onward there is no longer any turning back. That is the point that must be reached.”

KRLS – Carles – Puigdemont reached it all right now. He calls himself the “legitimate” President of Catalonia Republic. Some say he betrayed his fellowship, yet others call him “TinTin went to Brussels.” ~ an insult to Tintin? He hangs between hero and traitor, like Snowman & Assange [who as I am told advise him.] 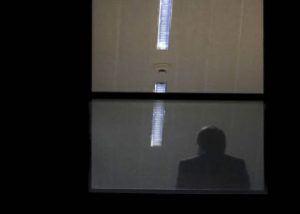 KRLS Puigdemont in Belgium, during his legal deposition process – 5 Nov 2017

This “Kafkaesque” ‘ProZess’ of Catalan ‘nihilism’ is a study in its own right. We predicted this to be the shortest lived republic ever. By short I meant maybe two or three days, but only FIVE hours was indeed very super short. Well-timed into ‘ingressing’ Aquarius moon – square Sun/Jupiter Scorpio, magnified.. see astro below – as Parliament President Carma Forcadell spoke CatLand’s DUI 15:27PM; Applause?!

(I never forget Carmen Forcadell counting the seventy secret little YES papers +/- 2. She needed 68 or 69 papers for “Legality” – as she is playing the part of Napoleon’s brother – re-incarnated. It was just for show anyway.) She declared solemnly the independence and birth of the star spangled pot banging republic.. applause. Then they sing the chant of “El Segadors“. the anthem, (The Reapers).

Pissing in the Euro Soup alright… 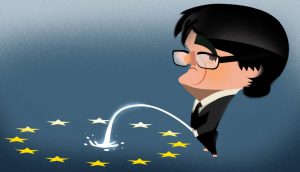 Mas-termind moves his piece across the Gothic chess board, observes.
Artur Mas might be Trotsky re-incarnated – and Puigdemont plays pawn?
[apology for not knowing who shot this photo. Stellar shot! Nordic.]

Never forget, the sedition / rebellion will be televised.. Live stream!
~ They can jail people, but not ideas whose times have come & gone ~

Puigdemont always proudly explains how Catalonia has its History of advanced culture since 1359. Problem is he still lives in his mind in that 14th Century, and we are now in time space 21.

Madrid put away – blue lights and all — 8 EiGHT — members of CatLand‘s elected government to jail, non-ceremoniously, and charged with rebellion, sedition, and all. keys thrown away – up to 30 + yrs prison possible? The other gang of 5 is now represented in Brussels as an “Exile Govmt.” — by the smartest lawyer in Europe. He says he is also a psychological expert in Madrid’s Mentality issues. This will be fun to watch.. while at same time we need to grasp this is pretty EXTREME stuff in laboratory conditions.

(The Madrid Judge – on the other hand / to her horror – has seen the deep intel by Guardia Civil, of all attorney generals – and she cannot say what she knows, national security stuff etc.) She should say what we saw on TV3.. or what she nows, about the advisors, from Estonian tech geeks, Venezuelan polit-buro dudes, Ukrainian media ops, to Israeli intel security, and other connections in China..

20 Sept 2017.. The 2 Jordis on top of 2 stranded police cars, directing the show with 40,000 folks in the streets of BCN. How to lock up a raid in process… (Violence?) Did Napoleon’s brother use it? Indirectly yes.) The police cars smashed and broken into, ammo & guns disappear into CatLand Pop. National Security? Imagine try this in USA! The snipers will shoot you! Here we discuss if it was politically correct to arrest 2 guys who caused violence???

Hence the kangaroo court appearances, and boiler plate orders printed in 24 hours. They are taking down a secret coup d’Etat silently, one that is still rolling. She is running a legal side show while Rajoy tries to “stage” an election. Imagine more than 2 – 4 sides to this story, and imagine it further out than Europe…}

[Between cognoscenti — “DUI= Declaration Unilateral Independencia” — they had a deal with Madrid 24 hours earlier, via go betweens Basque leaders etc.: “No DUI, no 155, new elections”; but the secret simple deal was torpedoed by the anarchists’ faction that had hijacked Puigdemont in 2016 when they took out Mr Mas. Albeit some say that ‘Cocomocho’ Pugy / Mr.Mas was/were in on it all the way since 2011. Now they cast /putch/ him out into Outer Orbit! The rest is canned meat history. It is Fluid in Pisces Neptune until 2024.]

KRLS’ “legal journey” to Brussels is complex – multi-layered. WindMills in their own rights.. Brussels is a dark place in Europe, full of drugs & crime & corruption.. etc. — Master Paul Bekaert is not a beginner. Assange styled.

[ Not like Frodo / Sam going UP to Mt. Doom — Lots of people shake in their pants there inside EU Capital, because “someones” among them played ALL sides to the middle. The Mole Hunt is ON now.]

Puigdemont will find out fast how deep that rabbit hole goes in Brussels.

((anarchic ~ əˈnɑːkɪk / adjective = with no controlling rules or principles to give order)) – powered by age old Karmic winds – have driven this world mad for hundreds of years. These inter-dimensional bad winds pick up now and then, again, like a nasty Ghibli or a Mt Canigou Tramontane wind or a Souther French Mistral. It drives people’s minds nuts. Everyone gets irrational. The winds are picking up as we move to 2020.

Why did Cocomocho fail his circus act on Hallo’ween ‘2017?
This CatLand show is frankly embarrassing. Catalonia has this one tenet:
“Whatever you do, fine, just don’t make a fool of your self!” 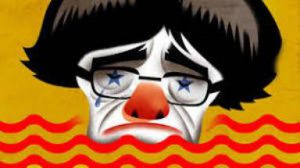 Unfortunately it is a collective psycho-drama, Neptune Pisces, even though it is personal, Capricorn, played out on public stage and pulling half a population into this vortex of misguided ideology and nonsensical irrationality.

Even if the clown speaks fluently in four languages, he avoids stating the truth in any of them. His ambiguity is astrologically in his genetics. But by now an internal coup has taken place, leaving the anarchists in Catalonia with two shadow governments, one in BCN / (Madrid jails right now) – and one in Brussels Belgium or Flanders – as ‘exiled’ and “legitimate” – as KRLS Puigdemont & Ada Colau claim.

From Salvador Dali’s triangle — (Figueres, Cadaques, Pubol) — the CatLand show looks beyond surreal, not to say paranormal. The world’s supra-natural shaman intel guru master, Vladimir Putin, gave a generous hint for all idiots, from his tool box @ Valdai Club:
EU – Kosovo – CatLand. . . What does it have in common? Connect Z dots!

Putin told the Europeans in 2017, same as what I told them in 1993:
“You should have thought about all this earlier – buddies.”

“As we walk the Path of Life
we enter our own reflection along The Path.
The GUIDING force on Path of Life is REFLECTION of SELF [timeless].”

‘The greatest Civilizations on Earth
were built & maintained through social order
& higher levels of cohesion & could never exist as Anarchic.’

Catalonia was a great sociological Millennial experiment, not gone wrong, but delayed now by few years again. The lesson is clear, we cannot have anarchists run inside / hiding in the system. Either anarchist outside system. . with free speech etc., in assigned spaces, or behave inside system and serve community. Anarchy & System do not mix well.

[Ada Colau — Alcaldessa Mayor of BCN Barcelona — younger Pisces born community leader of 4million people, is now also risking her career irrationally – swimming right into the deep swamps, when a super smart dolphin should swim clear of that dark mess… and head out to the turquoise Club Med.]

I saw a counter-intuitive colorful banner
hanging down from the Girona airport highway bridge.

Anarchists in Systems? Mix of both is lethal – like giving a monkey a gun. They don’t know the actual difference, their jungle law doesn’t adapt to our human rule of law, and it cannot be cross bred. Their aim is to export this virus allover Europe and rest of the world.

If they can pull off a coup d’Etat in Catland, under the nose of the EU, then the blue print would work any place; chaos would be total in under two years. Allover the place in Europe; that’s the plan. SOROS forces behind it all. A name that spells same backward is an inter-dimensional energy portal.

Sociologically observing, it is interesting to see now internal counter coups. Also.. the anarchists pushed Puigdemont to “legally” allow them to go defend the ballot boxes (get beaten up if need be), but he transferred his property safely, cannot be harmed, or indicted on Spanish soil, and went to Brussels to start the next leg of the “international anarchic windmill journey” – advised by a former [terrorist] ETA advocate attorney, master Bekaert. And so it goes.. you reap what you sow.

Alternate time line… The EU boss is unaware of his fortune in that Master Jacques Verges in Paris is dead – unable to represent Pugy-Mas. He would have finished off the EU in two days by now. Mr. Artur Mas would by now be the new EU President and Pugy would rule Spain. Karma – very badly timed.

(- There are those who speak / write of a Catalanist Totalitarianism new term? – )

Catalonia is one of those epic / karmic sagas, thousands of years old, hence EPiC — where it all comes out in the wash, when the longer you wait it out, the more you figure it out, and on Winter Solstice Catalonia elects its new parliament, yet again. – Suerte!

Aries born Rajoy just wants to know one thing: “What do you people REALLY want in Catalonia?” – He is more Zen than most folks see. Then he will make their wish legal come true. Watch out what you wish for, he told them! If this means be part of a multi nation Spain and do new constitution, it is a go. If it means waste Catalonia, fine. With all the consequences. if they want to be outside EU for 5 years, be my guests. Rajoy ends this saga on Solstice.

There remains a silent “intel” question which KRLS Puigdemont is after:
“Who high level inside top echelon of EU promised the Catalans some help?”
[it will become evident that a secret EU person guided Catalan’s ‘proZess.’]
At that point in 2020 the chess board gets re set. The nexus of people is odd.

Update 7 NOV 2017
this photo is not of Soviet 1917 October revolution graduation class.
it just looks oddly similar. Its from 7 Nov 2017 in Brussels. 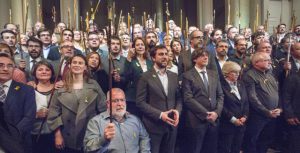 When you see 200 Catalan Mayors waving their magic wand shticks in Brussels at the EU elite system / media… You are reminded of the opening scene of Kubrick’s 2001 Space Odyssey – bunch of “gone wild” monkeys beating their clubs onto a smooth monolith — mirroring their insanity.

– You can only feel sorry for all of humanity. – St.Clair

This is why The Space Nordics told me not to interfere in this show. Just observe!

[[ Updates at El Confidential in Spanish ]]